The English trainer Nicky Henderson starts the 20011-12 season with 275 horses under his care and tutelage. The reason why so many owners gravitate to him is because; 1) he is a very nice man; 2) He was very well tutored by that great trainer Fred Winter. I had the great privilege of knowing him when he pulled my Ford Escort out of the gallops mud one winter day in Lambourn, Berkshire, after I had been watching the endless strings of horses do their morning exercise. Before he followed his calling, Henderson worked in the City in London as a trainee stockbroker but it was not the life for him. He was fortunate to come from a monied background and with financial support he set up as a trainer 30 years ago. Results have spiraled and he is one of the 3 dominant trainers in the UK. Forging seasonal battlement against Pipe and Nicholls. 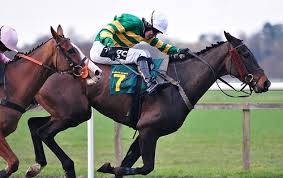 I tipped Binocular to Bluesky clients to win the 2010 Champion Hurdle at 10/1 ante post. He had had a setback in his training over that 2009-2010 winter and as he is a slightly fragile horse and for that reason the trainer was loathe to train him hard to full fitness. That great jockey AP McCoy, who brooks no excuses, was seething after he had been beaten by a neck in the 2010 of the running of the race. The reasoning being that the horse was not fit. Henderson had been too lenient on him.

He proved McCoy and my Lambourn contact right when winning the 2010 Champion. This blog is meant to be anecdotal and informative. Therefore I will ‘begin’ by saying; Back Spirit Son for the 2012 Champion Hurdle at his current odds of 10/1. He is a stable mate of Binocular and ‘my man’ in the town of Lambourn, who knows everybody you need to know, says I am to back him now for the race. He will win races between now and the race on the 13th March next year for you to recoup your ante post stake. Currently he has an official rating of 149. The standard for a good Champion Hurdle is around 170. The belief in his training camp is that he can make the leap from top novice to top Champion. Spirit is a generic term form the Latin for Breath!

I don’t have have a lot of advance news for the weekend now. Therefore I will post what I know; Sir Michael Stoute is eschewing the Cambridgeshire for a valuable handicap at Newbury on Saturday with Labarinto, and that is a tip in itself. My contact in the yard says he is a good and improving horse. My knowledge of the Northern Form is limited in terms of contacts. Henceforth I am at a bit of a loss for meetings at Ayr and Musselburgh.

I would now like to talk about horses I have known about and who will fulfill expectations. Beginning with Brian Meehan’s Vita Lika. Back her when she is back on good going. I tipped her when she hated the softened going at Ffos Las last time out. By the way these selections will be all 2-y-0 and 3-y-0 horses for now until end October. You must follow John Gosden’s Starboard who disappointed so badly on his debut at Ascot. He is a horse with a future. I tipped Luca Cumani’s SPIFER on this site when he was second at Ascot when he should have won but I am not giving up on the horse.

The form analysis allied to inside information is vital. Keeping a handle on statistics is equally important. However to be on the real inside in racing coups happens very infrequently. Nowadays it is a rarer. Last year I got a call from a contact who is very contained in his tipping to me, the horse was 16/1 as a result of him not having run for 1145 days. I am not going to name him or the trainer in this blog and I would never do so. Suffice to say the horse won easily after being backed into 4/1.

John Gosden is bringing Unex Michelango along in low keys races. Definitely one to follow next year. Brian Meehan has had a poor season by his normal standards. His Burano is a handicap for your notebook.