Hi and welcome back to my blog for the Glorious Goodwood meeting.  l have been telling you guys enough horses that won’t win but not had much joy with the winners, we are just over half way through the meeting and really we only need one winner  at the prices I select to put us in front, so plenty of time to find that elusive winner, so onto today:

2.00 an odd race in as much as a lot of the runners have very similar levels of form, I think that the quickening going will be too fast for Harris Tweed, Indian Days is the opposite in that he loves the fast ground and both times he has run here when it has been quick going he has won, Campanologist has been below form all season so best watched even though the yards runners seem to have hit some form.  Distant Memories is another that the fast going is against, also a doubt about the trip being his optimum. Jukebox Jury has been a good servant to Mark Johnston but doesn’t look to be in quite the form needed, he struggled to win a weak Newmarket race on his comeback.  Redwood is consistent  but finds it hard to win although he does boast course form on today’s going, it’s not a race to have a bet in because of the doubts and inconsistencies  of the market leaders, I would probably think Drunken Sailor would be the most likely to show his form because he likes the going and has won on the track and maybe Indian Days to get a place.

2.35 not a race that particularly interests me because there are not enough runners to ensure a true run race so tactics might play a big part, and a couple of the runners have bits of form that would win this if they produced that form, but will they , the solid horse has to  be Western Aristocrat who improved a bundle on his previous form last time and if he repeats that form and the others don’t perform he would win, but a no bet race for me. 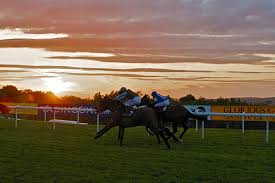 3.10 the Totesport mile which has to be one of the hardest races of the meeting to fathom out, but at least we know we will get a true run race which makes it a bit easier to find the winner…….so the problem is do you go with the short priced fav Green Destiny or look for something to beat it, well I’m looking for something to beat it, now my reattached head is back on the chopping block once again after saying Frankel could not win, Green Destiny will be my place lay of the week, because he is badly drawn and will need all the luck going to win from there, the going is getting too fast for him and I think the John Smiths race he ran just fell into his lap the way the race developed and Green Destiny was there to pick up the pieces.  So what will win?  Highland Knight was given a perfect ride last time and will not find it so easy today, though the course will help, I’ve narrowed this race down to just four runners that I think have a chance of overturning the fav Green Destiny but to find out what they are you need to be a member or register for the free trial.

3.45 not a betting race for me, I certainly would not take odds on about any 2yr old running here for the first time, he may win but he won’t carry any of my cash.

4.20 Lord of the Shadows has a lot of weight and has not shown anything to suggest a 2f step up in trip will benefit ,Glee hit a flat spot last time before coming through and winning, he can’t afford to do that today in this stronger race, Goldoni handles this style of track but not sure if the form is good enough to win this, Mabroor has a lot of weight for winning a couple of moderate races, I’ve narrowed it down to just three runners that I think have a chance of winning this and they are all at 19.0 and bigger.

4.50 a fillies and mares race which as all you guys who read my blog and receive my selections know, I don’t get involved in because they are too unreliable.

5.25 it looks like this race will be run at a strong pace with a lot of the wide runners wanting to be up there, whether any of them can get to the front and over to the rails is another matter, they may just get in each other’s way, Redvers has not proved to be as good on turf as the a.w yet so not for me at the price, and the same can be said about Mosaicist.  For those following my tips with BetAdvisor, I’ve narrowed this race down to just four runners I think can win. We’d like to thank Micky for sharing his views on Goodwood with us this week, no blog post tomorrow but we’ll be back with the free tip on Sunday and more posts on Monday.