If you back horses on a regular basis you are a TRADER, it depends upon the number of horses and the size of the bets which establishes your position in the ladder of trading.  Jared Dillian was a Senior Trader at Lehman Brothers in New York for seven years and he experienced the highs and lows of the game, the business, and came to clearly understand the following words said by Warren Buffet (if you need to ask, you haven’t been paying attention over the last 10 years) with intense clarity, “ Remember that the stock market is

In 2003, five years before Lehmans went bust, Dillian was dealing with his own crisis, gambling millions of dollars, erupting from rages within, drinking binges which ultimately led to massive depression.  He wrote a book about it; “ Street Freak: Money and Madness at Lehman Brothers. “  All I am as a tipster is a trader.  Feeding off my informants to try to get a glimpse of how the races will evolve and if such and such a price is a good position to take.  Analyising races for hours and hours.  I used to think my work was akin to being a broker until I read Dillian’s  book.  Brokers sleep well at night traders don’t when things are going wrong.  Several Betadvisor clients have expressed their disquiet at my recent run of downward spiraling results.

It would take a tome for me to explain why my particular tipping has gone t*ts up.  Suffice to say, I have had to adjust my modus operandi as the goal posts have been moved time and time again in racing since I entered the Sport/Business in 1979.  People come and go, informants come and go, the BHB shifts the format of the fixture list, the BHB adjusts the parameters of the handicapping system.  Many influences tip in with their say sos.  I hope you will be glad to hear that Dillian is now living in relative peace in Myrtle Beach, South Carolina, where he writes The Daily Dirtnap, a financial newsletter for traders.  The markets are in his blood, he cannot fully walk away.  And I will never walk away from racing.  Keep adjusting will be writ large on my tombstone.

Now to the ARC and matters horses this weekend.  Steam into GALIKOVA each way in the second of the 3 great Flat races to be run on the Planet annually.  The other 2 are The Derby ( no need to ask which one ) and the Breeders Cup Classic.  John Gosden pointed out in an article on Friday in The Times that “ You don’t just go there mucking about.  You need the right horse. “  The French are brilliant at winning ‘their’ great race, they have won five of the last ten runnings of the contest.  Freddie Head is not mucking about when he makes the short journey from Chantilly to Longchamp with his 3-y-0 filly who has won four of her five outings this season and has been brought to the boil at just the right time.  She has a beautiful action suggesting that the likely good to firm ground will be no problem for her.  Colts and Fillies from the Classic generation have won seven of the last ten runnings of the race.  Also eight of the last ten winners have been drawn 8 or lower.  She has a lovely position in stall 4. 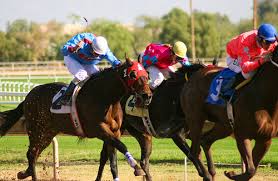 I don’t think the English and Irish challenge is truly top notch this year.  WORKFORCE is now a 4-y-0 and has had a bit of an interrupted season training wise, and back to back winners of the Arc are rare birds indeed.  Bear in mind that the five successful 3-y-0 olds to have defended their crown since 1994 were all turned over.  SNOW FAIRY does not have a good draw in berth 11 and her handler is having a mare of a season.  For all that I think Gosden is a great trainer I don’t think his Leger winner MASKED MARVEL is a top notcher.  He won what turned out to be a moderate final English Class on September 10th in a course record time, which says either the ground was very fast indeed or I am completely barking up the wrong alley in my assessment of him.  The second home that day, Brown Panter made the transition from the handicap ranks whilst the third SEA MOON was given a poor ride by Peslier and should at the very least have been second.  And my man in the Stoute camp told me several times between April and September that the colt is just a galloper and not in the same league as Workforce in terms of raw ability.  RELIABLE MAN is just that but on official ratings lags behind some of the field.  However he has won the French Derby and the Prix Niel, is drawn 7, his handler Alain de Royer Dupre has won two of the last ten Arcs with Dalakhani and the brilliant filly Zarkava, both 3-y-0s.  Couple him with Galikova in an exacta box bet.  This is different from the straight exacta where you have to get your picks in the correct finishing order, 1 and 2 in the race.  The Box bet means they can finish either way round.  English punters will know of it as a reverse forecast.

Finally two horses about which I have had advance news for the weekend in the UK.  DESERT LAW and GENKI at Ascot on Saturday 1st October.